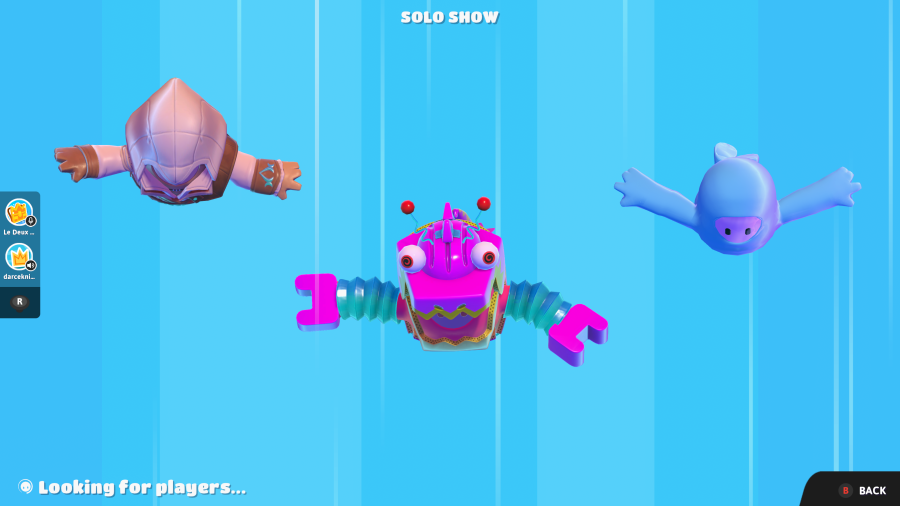 I’ve been wanting to play Fall Guys, but since I refuse to play anything other than Xbox, I’ve never had the opportunity to do it… until now! Fall Guys is on Xbox! And it’s free! My brother was in town visiting this past week and we had a blast playing this game together. I was laughing, cheering, and yelling through every round. Here’s my take on Fall Guys:

Fall Guys drops you into games and chaos instantly ensues. Join solo or with a group – it doesn’t matter (although I think it is more fun when you have someone to scream with). You can have the game search multiple playlists and you’ll be randomly dropped into any of them. The solo playlists will have up to 60 people to start while the group playlists are smaller. The great thing is, even when you’re playing terribly, there’s usually a bunch of people who are way worse. For instance, I should not have made it through this round where you have to stay in the gold area until you reach 100%, but somehow I did.

Beginning rounds are relatively easy to get through as long as you aren’t thwarted by your environment. While I was able to get through to the final round pretty frequently, securing a win is not that easy. In one game, I was in the final round playing with my brother and it ended up being just us two left. I was doing great until I was too slow to jump and there was no way I was going to win. My brother, however, was on my boyfriend’s account, so I chastised him for trying to beat me (let me win for my blog!!!) on his account and said he should let me win. He was not going to let me win until he asked my boyfriend and he gave the approval. He dived off and I got my first win!

Don’t judge me. The next time this happened, I sacrificed myself so we are even now. And, we did win a squad game legitimately! What’s weird is we were the last two again and even though we were on the same team, one of us had to die in order for the match to end.

The game is hilarious and I burst out laughing at the ways people try to sabotage each other. My brother would grab people and push them away from the finish line. Another game mode reminiscent of Squid Games had people pushing one another forward to find the correct path. This meant that some people inevitably fell to their death. It was hilarious. You never want to be the first to go because that could be the difference between qualifying and being eliminated, but sometimes, a dramatic move can take you to the top.

Fall Guys also super appeals to my desire to have cute outfits. I am obsessed with my cardboard monster outfit I got. There’s so many ways to customize your character and it obviously makes no difference in terms of how well you play, but it is something I love. I didn’t get any outfit to begin with because I wasn’t sure how I’d feel about it, but I quickly fell in love with the game and bought myself the costume. Don’t be surprised if I end up with lots of others.

Anyway, I’ve only been playing for a few days and I’m loving it. It’s mindless fun, there’s a huge variety of levels/challenges, and it’s easy! This game is great playing by yourself or with friends – if you haven’t played it yet, I recommend checking it out!

Are you a Fall Guys fan? Let me know what you think of the game in the comments below!