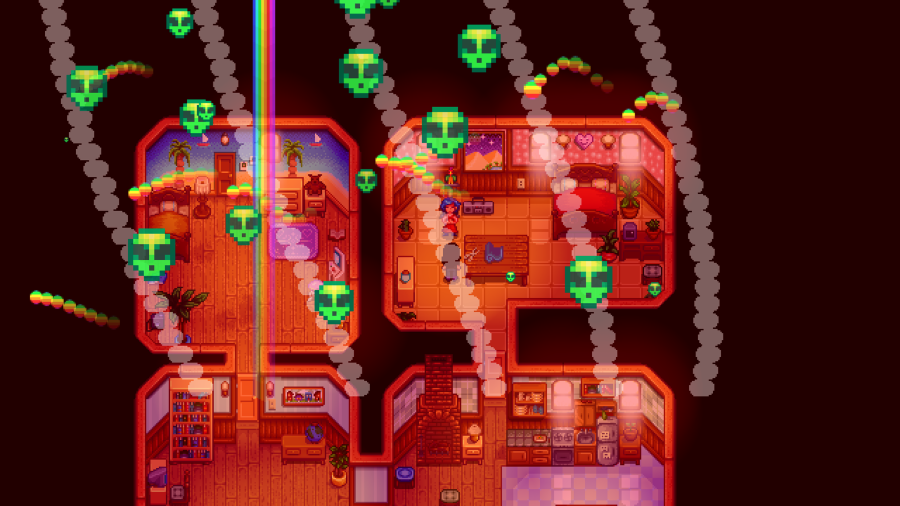 I had neglected Stardew Valley for a bit because Back 4 Blood entered my life. Taking a break from Stardew isn’t too detrimental, but it can take you a while to try and figure out exactly what the heck you were doing last time you signed in. Now that I’ve found my place again, let me share with you my latest Stardew adventures. As always, some of these updates may be considered spoilers so proceed with caution.

Let’s start this post with a callback: Sebastian was absolutely the right guy for me. I mean, he makes off-the-cuff comments like this that make no sense, he is totally obsessed with frogs (you’ll learn this even before you marry him), and he’s got an inappropriate sense of humor apparently. I mean, I’ve been running around in a skull mask for years in this game and the first night I take it off, check out what he does:

Hah! I don’t think so, friendo. Anyway, I kept giving him void eggs and he would give me coffee in the mornings. We’d fallen into our normal routines of me abandoning him all day so I can dig in some dirt. Then one day, I’m cruising in the rain and I stumble onto our 14-heart event. This little frog-loving man wrangled me into being a mom after all…

My focuses lately have been on improving the town and building up Ginger Island. Stardew Valley was filled with eye sores. From the broken down JojaMart to the leaking sewer pipes, it was time to get to work. JojaMart was the first thing I was able to fix. Once you complete the requirements for this building, it turns into a movie theater. To be honest, I’ve only visited it once and I’m not sure if I’m going to do it much because it’s just a little interactive cutscene mostly (maybe I’m wrong). It certainly looks better though!

On the bottom portion of the map, you’ll stumble upon a fat raccoon by the leaking sewer pipe. He asks for a random assortment of food (fish, prepared foods, etc.), and in return, he cleans up all of the trash in Stardew Valley. My favorite thing he cleaned is the dog pen outside of Pam’s trailer, although I still can’t interact with him, so that’s a bit of a letdown.

The most expensive change to my town is upgrading Pam’s house. Pam is not a character I like, but I feel bad for Penny and she is nice enough. With a lot of money and wood, you can choose to pay for a home renovation. Robin will deliver and once it is complete, you’ll have a little cut scene where you can decide whether or not you want them to know you paid for the house. I chose to remain anonymous, but after seeing how decked out the inside is, I kind of think maybe I should’ve taken credit…

I’ve been spending a lot of time upgrading Ginger Island. I finally saved up enough walnuts to build the beach resort. Once you unlock this, townsfolk can visit the island and you gain access to the secret pirate location. I don’t really spend time in that area, but you can earn more walnuts in the zone and interact with pirates when they’re spending their nights in the hideout.

I also finally saved up 100 walnuts and gained access to the secret room on the far west side of the island. Inside is Mr. Qi with a new set of special challenges, a vending machine, and a perfection tracker, which will make you feel incredibly inadequate and insufficient in the game.

There is SO MUCH going on in this game, I feel like I’m jumping all over the place when I write these updates. Here are some more notable moments:

Phew – that was a lot! I’m getting dangerously close to finishing up year 4 of Stardew Valley. Are you playing this game? Why haven’t you married Sebastian yet? Let me know your thoughts in the comments!