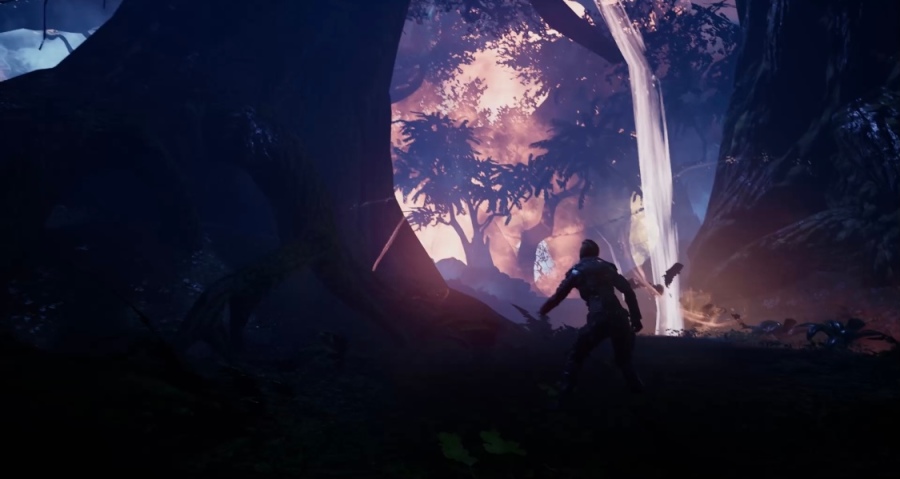 Admittedly, I didn’t know anything about this game going in. I kept hearing the name, but knew nothing about it except that people were calling it a potential “Destiny killer”. I play Destiny. A lot. Not as much as I used to, but I’m still on it. Seeing as it was free on Game Pass, we decided to give it a shot. I’m not very far into the game, but I am sharing how I’ve felt playing it so far.

First thought: HOLY. CUT SCENES. There are so many cut scenes that the first time I launched the game, I didn’t even feel like I really played anything. Cut scene after cut scene… I didn’t want to skip anything because I wanted to know what world I was getting into, but it started getting to the point where I was bored. Not to mention, some of the moments made me laugh when they shouldn’t have, like this wonderful scream and facial expression:

Once you get through the initial story setup, the cut scenes don’t stop. There are literally cut scenes that last for 2 seconds to show you opening a door and then it immediately transitions into a loading screen. So. Many. Pointless. Cut scenes.

The gameplay has been alright, but it gets better the more you unlock powers and abilities. I personally am not a fan of third-person style gaming, but I’m working through it. Something that stands out to me is the AI feels kind of all over the place. For example, snipers do not miss. They are perpetually staring down the scope and hit you hard any time you stand up to try and engage. And because your character takes so long to get oriented and aim, you take huge hits to your health and immediately have to duck down with nothing to show for it. I also feel like there are enemies that randomly appear that are complete bullet sponges and the difficulty scaling with these enemies feels off. Even with your insane powers, it feels like you barely make a dent in them and you’re running to restock ammo a lot.

I also don’t feel like the controls operate in the way you’d expect them to sometimes. I find myself trying to execute moves or take cover and my character is just doing whatever she feels like instead. Also, you can’t jump. And sometimes I’m on a ledge and want to jump down, but my character won’t, so I have to go back and walk down the stairs like a dork.

That being said, I have been playing cooperatively (which is also a pain to set up and randomly disconnects in the middle of playing) and having a second person doesn’t always mean it is easier. It does, however, let you watch how your powers can work together to make some cool combat moments like this one:

I’m still in the very early stages of the game and I am going to keep playing to see where it goes. This game is very new and to me, feels buggy in a lot of ways. I see a lot of areas that can be improved and fine-tuned for better gameplay, but overall, the introduction of these unique abilities is intriguing enough to me that I’m going to push through and see how it evolves. For being free on Game Pass, why not? Give it a shot and let me know if you have a similar experience.